Apologies for pulling something of a bait-and-switch but this isn't really a blog post about trees.

Instead, a young woman in Darfur [El Fasher, Sudan, to be more precise] hand writes an indie newspaper and posts it on a tree, where approximately 100 people a day stop and read it, or at least peruse the headlines. All of the tools of the internet at my fingertips, and her reach is greater is mine. I love it.

For the past 10 years, Awatif Ahmed Isshag has handwritten monthly dispatches and commentary about life in El Fasher and hung them on a short, wiry tree that scatters shade along the yellow-sand lane by her house.

For the past four years, the dispatches have included items about the conflict in Darfur that appear to represent the only independent local reporting about the fighting in a region where most media hew to the official government line.

Isshag's sister originally started the newspaper on the tree, writing articles about El Fasher but with an emphasis on women's rights. When she died in 1998, Isshag took over. She was 15.

Looks like the citizens of El Fasher have about as much trust in their MSM as I do in ours. Long live the indie media!

Update: The above link no longer works. Try this one. 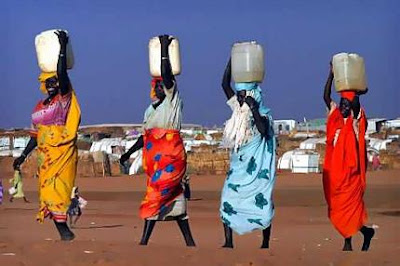 Yikes! I think I prefer the relative anonymity.

i have to agree with you there, keif.