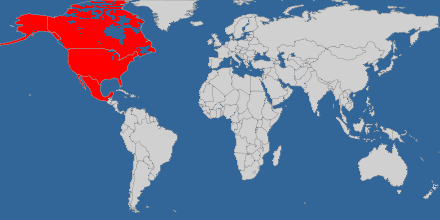 visited 4 states (1.77%)
Create your own visited map of The World or try another Douwe Osinga project

Yep. 1.77% for me as well, though a different set of countries. The percentage seems to be by count rather than land area.

if they wouldn't all turn into cat toys, i'd have a set [or two] of these.

i'm guessing it's number of countries too, though that's a bit of a misnomer, since puerto rico is one of the 'countries' i've been to.

I think I'll pass on that exercise for a few years to stay out of trouble.

I know I haven't been to South America or Antarctica.

I would note that I did most of my traveling on the taxpayers.

You mean... the cats would pull then off the frig?

in a heartbeat they would, nick. everything around here gets investigated with an inquisitive claw, and if it moves, it's prey.

i suppose you could always fudge the truth a bit, bryan, and just not tell us about all of them.

my brother's been to south america. in july. he had the temerity to email me photos of himself skiing down some mountainside. i was slaving away the days under a hot georgia sun at the time.

fun .. 29, 12.8% .. haven't made it south of the equator though. favourite flyovers: russia and greenland (but you knew that). also, can't really say that i "visited" canada.

your russian flyovers are what got me irretrievably hooked on google earth [but you knew that]. i had a flashback to lake baikal just the other day, in fact.

back when i traveled a lot [a lot] i used to stop in and visit my apartment and my furniture and my books occasionally.