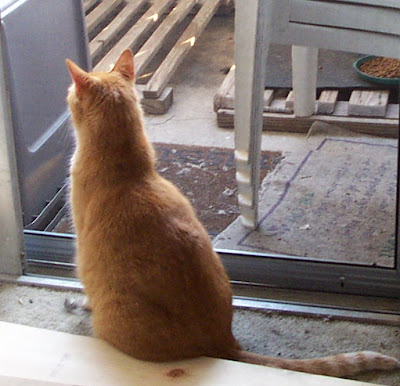 this standing up to pee?

Curmudgeon cat has always been a stand-up kinda guy, especially in the litter box. This has posed some problems, given that he won't go inside one of those enclosed litter boxes, and the high-sided boxes aren't generally built for a cat who likes to balance on the side of the box [standing up] rather than dirty his paws by touching the litter.

It took me a few tries, but I finally came up with an arrangement that works, except that it's a bit of a Rube Goldberg cat box, and since everyone likes a clean bathroom, curmudgeon cat can be counted on to jump into the clean box even before I can get it fully assembled again.

Which he did tonight. Cats.

This time, though, as I watched the puddle spread across the bathroom floor [thank ceiling cat for linoleum], it was with great joy mixed with only a little exasperation. Not long ago, curmudgeon cat's old-cat-itis [he's, best guess, about 18 or 19] turned from a creeping case to a galloping case, and in short order he went from being his own sofa cushion to downright skeletal, literally half the cat he used to be, and nothing the vet did seemed to help.

Every day I came home from work expecting to find a dead cat, and every night I wondered if I'd put it off too long and should have already taken him in for that final trip to the vet. And since things seemed worse at night, and since he was going to die anyway, I decided to stop the bedtime medication to see if his last days would be a little more comfortable. And lo, he was. So much so, that he perked up a bit. And so, I stopped all the other medications too, at which point he perked up even more.

He's been eating, drinking, pooping, peeing, grooming, purring, and talking up a storm for a couple of weeks now. And while he's still pitifully thin [the photo is from fatter days], his skin is clearing up and he's got enough strength back to jump from the floor to the counter top without any intermediary steps [though he still takes the easy way most times].

So, apparently his aging system can no longer handle any of the drugs he's been on for much of his life [he's always had that 'sensitive stomach' trouble, it's just worse now] and I've had to search ever further afield for food that doesn't make him throw up, and the new no more drugs policy means that the only defense left against his skin problems is frequent medicated baths [thank ceiling cat he actually likes baths]... all of which is a real pain, but golly gee whiskers I'm deliriously happy that he's going to stick around for a little longer.
Posted by hipparchia at 6/16/2009 07:41:00 PM

I think the curmudgeons live the longest. They're too cranky to give up. Yay for extra time.

yay for extra time is so right.

this cat is most definitely not the giving up kind. i adopted him from the pound precisely because he was on death row, and he was there because nobody wanted a cat with his temperament. he was screaming and growling and alternately hiding in the back of the cage or attacking the people who walked by in front of the cage, even after having been there several days [not that i blame him a bit].

he turned out to be a real lover [if he approves of you] and just adores everybody at the vet clinic [must be some good stuff in those shots they give him], but he's beaten up a couple of large dogs and scared off at least one would-be burglar, so he's no pushover.

What a delightful story, hipparchia, and well-told. Thanks; I needed that!

Oh, and, um, hipparchia... would you take care of me? :) You're bound to be better at it than what passes for medical care in my world right now. For all the problems he faces, Curmudgeon Cat is one lucky critter to have you as his caregiver.

curmudgeon cat has a bit of a foot fetish, he'd probably gladly share his medicated baths if you need a place to soak your feet. otoh, i tend to get along better with cats than i do with people, so you might be better off staying where you are.

hard to say which one of us has been luckier, me or the cat, but i'm really glad i picked him out at the pound. he's been a wonderful companion. no telling if this latest development means i get to keep him for a few more weeks or a few more years or something in between, but i'll take all the extra time with him i can get.

The human health system has a hard time understanding that old people react differently to medication than young people, so I'm not surprised to see the same problem with vets.

Actually vet medications are usually more precise because they are based on weight.

I already know that I can't put Dot on any long term medication scheme, she just gets too upset when I try to give her any kind of medication. One week long stint of antibiotics convinced me that neither one of has the strength or stamina for anything more. She wouldn't let me near her for a month afterwards.

If he is happier without meds, that is a cure for the biggest problem.

he's always been carefully weighed before each new prescription, but some drugs have a narrow safety range. if you start losing a lot of weight, that could affect things big time. not sure what it was he was throwing up so much, the medicines, the food, or all of it, but he's always had problems with both.

i'm guessing it all added up rather quickly [or multiplied]. once he regains a healthy amount of weight [if he ever does], i'll rethink the medicines if it looks he needs them again.

the food issue is harder. manufacturers keep changing their formulations, and while there are a lot of words on every label, there's darn little useful information. i've tried getting him to eat home cooking so we can identify and avoid whatever the troublesome ingredients are, but he's hooked on junk food.

it's very easy to give him medicines, he's such a glutton [and tough guy] that he'll happily take any pills, liquids, shots, whatever in exchange for yummy food.

This only reinforces my attitude towards medications. Sometimes the side effects are the real killers.

So glad your curmudgeon is having a renaissance. I'm glad to know that I am not the only one having to deal with this Old Cat Attitude.

There was a time a couple of years ago that Smokey was really suffering from what I called a "Glass Stomach", in that every time he ate he would just turn right around and throw up. Turned out that event though he had no tape worm segments in his feces, he had a tape worm. The head of the thing being embedded in his upper intestines caused a long term inflammation and a low grade infection. As soon as I had him wormed for tapeworms, his symptoms abated and within a week he no longer was upchucking everything he ate. Bless the vet who thought to just give him a tape worm medication dose "just in case."

smokey is truly lucky to have you [and that vet! i've got a wonderful, smart vet too].

yep, tapeworms have been an issue here too, and the deworming has helped. he's keeping food down, and his skin is staying cleared up, but gosh he's skinny. he's the equivalent of about a 90-year-old human, so it's not unexpected. i keep tempting him with people food, but he's picky, and his favorite -- fish -- is off limits. that one he does throw up reliably, no matter what else may be going on in his system.

i'm a believer in medicines, but they are generally poisons after all, and some of them are less safe than others. got to keep a close eye on their side effects.

as for the attitude, he's actually mellowed in his old age [somewhat]. when he came from the pound he was the jack bauer of the cat world: staring down cars, attacking rottweilers, and once even scared off a would-be burglar.