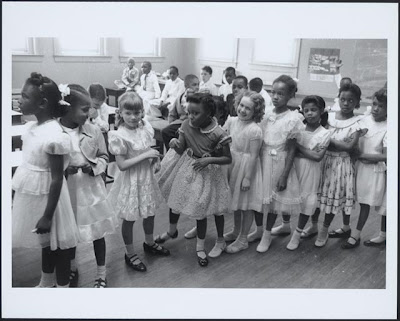 Nearly seventy years ago, Kenneth B. Clark and Mamie Phipps Clark began studying the effects of racial prejudice on young children. Their research, and Professor Kenneth Clark's testimony, ultimately played a part in the Supreme Court's decision in Brown v. Board of Education to end school segregation.

Since then, the Clark doll test has been used in all manner of research by a host of researchers. Among the newest and youngest of them is high school student Kiri Davis who put together this mini-documentary:

For my first daughter's first birthday, my wife and I thought that it would be cool to get her a doll. Her first baby doll: it was a big decision, pored over in much more detail than it really deserved. In the end, we thought it'd stimulate her the most if the baby pretty much looked like she did (as she was learning about body parts and stuff then too, as well as aping that parental affection in that impossibly cute kiddie way). It was fine, and only lasted till the following Christmas (about six months), at which point she got inundated with dolls of every conceivable race (though of all suspiciously similar socioeconomic status), and teh flood continues as she approaches double digits. The second daughter got the integrated pile from the get-go. I don't even know where the hell they all came from anymore.

It's not by a large margin, but I think the most popular may be the Asian ones. (The only boy of the bunch gets a Korean name.) Does that mean anything? I'm going with no.

(and below: I'm jealous. Can you guess how many manly men come to my door bearing gifts? yeah, esactly. To get in on that game, I'd have to hunt and fish myself. Boring and brutal. I'd rather read read and write.)

[manly men bearing gifts: it helps if you're as adorable as i am!]

sigh. i'm so odd. when all my friends had dolls, i had stuffed animals. i sewed up their wounds and splinted their broken legs. i had dolls too, but mostly they helped me in the stuffed animal hospital.

in that video, the "black" doll doesn't look right at all [to me]. i can't decide if the skin color is off or if it's because the hair is the same shape and texture as the "white" doll. maybe both.

Adorable like a puppy (of war)? Yeah, god forbid I give the impression of anything less than stupendously manly. I just think the men who need to act it out are annoying. I've considered the odd fishing junket, but that was as much for the excuse to drink as for the freezer-ful.

And you're right that the black dolls aren't very african-looking. But then they're all of them pretty creepy in my opinion.

Speaking of which (actually, not really): I will not paint my house gothic black. What the fuck is up with that?

[i have a sneaking fondness for iupac names]

have to agree with you on the dolls, i think.

most of the hunters/fishermen i know are not manly men, and yes, several of them hunt or fish just for the excuse of spending a day in the woods or on the water, beer being the highest priority.