Ask and ye shall receive. 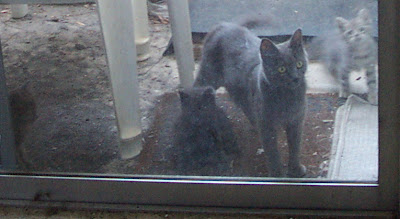 T'were Mustang Bobby and Bryan who first turned me on to Friday Cat Blogging.

I [heart] Snowball, but had also noticed that Bryan has a link in his sidebar to Alley Cat Allies, and he has ever since been enshrined in my heart as a good and worthy person.

Bryan's worthy character notwithstanding, I've warned him that I was going to blame him for these kittens. As you can see here, I was grousing, not too long ago, about not having any kittens of my own.

What followed was that a week later I discovered a whole passel of kittens on my front porch!! Kittens in grayscale. Kittens with a blue mom cat who is a dead ringer for Ringo. I'm just sayin'.

In all fairness, I should tell you that shortly after discovering said kittens, I sent Bryan a panicked e-mail, asking him [in rather more decorous language] WTF do I do now?!. He very kindly sent me back a link to these folks. Manna from heaven! A TNR group right here in my own little corner of the Redneck Riviera!

A TNR group whose website I then perused with growing dismay. It looked like they could help low-income people who needed to have their pet spayed or neutered [phone number 438-FIXX] and it looked like they could help someone who wanted to become caretaker of a feral cat colony. I'm none of the above. Still, I finally, a few days ago, decided to suck it up and send them an e-mail asking for whatever help they can give me. I hope they answer soon, because these kittens are probably going to be old enough to go to new homes in another couple of weeks.
Posted by hipparchia at 5/24/2007 08:25:00 PM

They'll be ready for new homes if they are human compatible. It is a definite plus that they have mastered the art of the litter box, but the problem with feral kittens is being friendly to people. I have a number of kittens outside that are cute as a button, but they shred anyone who tries to pick them up.

Socializing [playing with them] the kittens is important.

I've picked them all up, and handled them gently, and even gotten them to relax slightly while I'm holding them. This is still a long way off from their actually liking human contact, and I figure I don't have much time left to make a favorable impression.

I spent much of last night wandering through TNR websites, and found some good suggestions for taming kittens. One I hadn't thought of: kittens apparently find chicken baby food irresistible.

I've spent the last 15 years clicker-training dogs and believe whole-heartedly in the power of yummy food. I am chagrined to have not thought of this sooner.

I'll be spending the holiday weekend bribing my way into their fluffy little hearts with baby food. If this shows even the slightest sign of working, I'll be inviting the neighbors over for a Memorial Day Baby Food Fest.

If you want to save some money, slow cook a chicken thigh in a minimum of water, an when it's good and done, run it through a food processor/blender. Include the skin and all of the liquid to make a paste. Cats don't even have the sensor's on their tongues for sugar. Cats need a lot more fat than a dog.

I use leg-quarters for 40¢/pound to make cat food. I buy a 10 pound bag and break it up into smaller packages for the freezer. The dark meat has a stronger flavor and more nutrients than the white, and it's cheaper.

Chicken livers are good, but you can't get carried away or you'll end up with a vitamin overdose.

My site's back. It was in transition when you stopped by last night about midnight.

but those are the parts of the chicken that i like! you mean i'm going to have to share?!

seriously though, thanks for the recipe. sounds way more appetizing than baby food. leg quarters, especially in bulk, are eminently affordable, thank goodness, but livers [and gizzards and hearts] are hard to come by.

so far, the porch family is eating its way through $5 or $6 of iams dry kitten food each week, which i'm chalking up as a doable and temporary increase in the entertainment budget.

this morning i splurged and spent a whole dollar and a quarter on two jars of baby food, one chicken and one beef. the kittens looked at it like i'd put out poison for them, but mom cat thought it was great stuff. curmudgeon cat and the dog have volunteered to eat any leftovers.