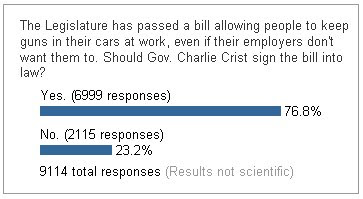 I'm back in the minority again, having voted NO in the poll that accompanies this article on Florida's newest We're The Wild West Of The East Coast law.

The article quotes a few pro- and anti-guns-at-work folks, but I especially love this rationale:

Jay Dewing, owner of Dewing's Fly and Gun Shop in West Palm Beach, said the bill passed should have gone further, and that being able to have a gun in one's car isn't enough.

"Let's say I'm in the mall and there's a mall shooting," he said. "The only reason I see to have [a gun] there is for moments like those and you won't have it."

Because we have, like, tons of mall shootings here in Florida. Oh wait, while it's not a non-zero number, we have so few mall shootings here that we're reduced to reporting on kids firing their Tasers and apparently heaving cinder blocks at each other. Not that we shouldn't be doing something about kids with Tasers, but arming Jack Bauer wannabes isn't going to fix that problem.

As some one who went from uniform to plain clothes I can tell you that my blue windbreaker with an over-sized badge on the front and Investigator on the back in reflective lettering did little to help even after the uniforms were told via radio I was entering the area.

It is impossible to get a good target in a crowd. The chances of hitting a bystander are too high. You don't want untrained people firing, and you might be forced to take out "Joe Helpful Citizen" if he wades into a shooting scene with a weapon. There's a good reason for police uniforms.

I hate to break it to Dewing, but if there's a shooting at a mall and a uniform shows up and sees him waving a gun and plants a round in his chest, it's a righteous shooting.

If you have a gun, you are not an innocent bystander.

well, i s'pose you have to have a functioning school system if you want your citizens to be able to read and comprehend big words like investigator.

i'm hoping that the next time joe helpful citizen whips out his gun at a mall a little old lady will brain him with her parasol.

hipparchia......a tree hugging liberal that wouldn't know how to defend himself or anyone else.....

you're right about the tree hugging liberal part, anyways.