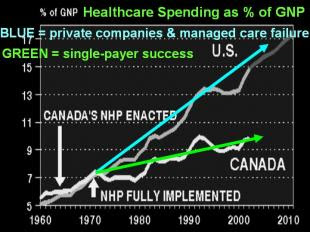 The New Yorker wrote, "'If you're starting from scratch,' he [Obama] says, 'then a single-payer system'-a government-managed system like Canada's, which disconnects health insurance from employment-'would probably make sense. But we've got all these legacy systems in place, and managing the transition, as well as adjusting the culture to a different system, would be difficult to pull off. So we may need a system that's not so disruptive that people feel like suddenly what they've known for most of their lives is thrown by the wayside.'" [New Yorker, 5/7/07]

Can't manage the transition?! Canada did it, we can too.


The Senate Finance Committee hearing is tomorrow. Send an email NOW. Tell them

Tom Daschle, Mr. Democratic Doormat, Mr. My Wife Is A Lobbyist, is the choice to lead Health and Human Services and lead the "fight"?

How many more Democratic losers are going to be put in charge?

This isn't change, I and just don't believe it!

Of course, that last bit should read : and I just don't believe it!

Liberals and progressives backed the wrong horse for change.

well, somebody's got to defend the poor beleaguered insurance companies from the hordes of sick people.

none of the 'big 3' -- not obama, not clinton, not even edwards -- was going to bring us any real change.

edwards had the courage to at least say the words single payer though not often and not very loudly. mostly i liked him for his threat to take congress' health benefits away from them if they didn't pass universal health care in the first 6 months after he took office. that, and the fact that as a trial lawyer, he had successfully beaten insurance companies in court, making him the only one with any kind of record of actually fighting against the industry.

i've spent the evening reading various sources' take on what happened to the original clintoncare in the 90s. apparently bill gave up on single payer back in the late 80s, based on his experiences with arkansas medicaid, and decided then that 'managed competition' was the way to go. nor was he only mainline democrat touting 'managed competition' about that time. it's a virus that has infected them all, and unfortunately that virus isn't killing off its hosts fast enough to do us any good.

It's not just Daschle. Apart from Rahm Emanuel (and not for the better in his case) and of course Hillary, in the whole of Obama's announced or leaked cabinet offers to date, not one of 'em has (ahem) a single pair. No 'nads of either flavor in the whole lot of 'em. Shout it loud: "We want single pair!" (Or more, of course.)
---
[Not on this post, but earlier today, I got a CAPTCHA text of "fishiest". The blog post was about ID Creationism...]

(Apparently I spoke too soon. As I look over the latest list, Obama seems to be doing somewhat better than I expected.)

life without bad puns would not be worth living. thanks for the day brightener. i have to admit to feeling discouraged of late, since it looks like we may get stuck with universal corporate welfare.

fishiest! and while we're speaking of mr mail-em-a-dead-fish himself, too. you're really on a roll.