Speaking of blowing stuff up 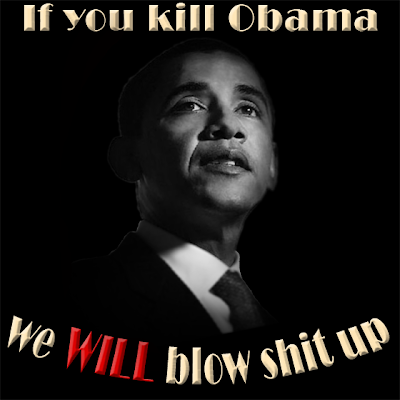 I have to admit that it was a jolt to realize that I'm not especially worried about the lives of any of my favorite candidates. Worse yet is that even as Martin Luther King Day draws near, it hadn't occurred to me to actually remember King, or Medgar Evers, or Malcolm X.

Still, I'd be willing give up my hopes for single-payer health insurance or a populist champion for the little guy [me!] in exchange for the intangible but important social benefits to be gained from having our next President be a person of either the wrong sex or the wrong color.

Racism is officially a bad thing, but sexism is still openly practiced with no real down-side.

No one would tell Obama to return to the "plantation", but Clinton had to put up with "Iron My Shirt" signs just yesterday.

This is garbage. The change still hasn't taken place. Imus was bounced for racism, not the sexism.

There's a long way to go.

As a white male, I don't see what problem you're talking about...
.
.
.
.
Okay...I think sexism will remain with us as long as there are so many women who willingly (and vocally) support the system.

I think the most pressing issue is building a better country and more civil society which would require constant attention to the elimination of both.

Trying to determine the greater victim or remediating them in some sort of order can only aggravate the demographic second in line.

We can accomodate both. And must. And must do even more.

While I'm confident that each of the top three is fully electable over the field of Republican dwarves, because of our nation's history, I do worry that some pathetic idiot might attack Obama but we can't let our choices be constrained by that concern.

I want someone who can be a motivator, statesman, diplomat and fighter, a rare combination. I lean to Edwards. He's setting the agenda, I believe, as his challengers keep adopting his rhetoric and choose similar policy prescriptions.

i agree, edwards is setting the agenda, and this is forcing the others to take note and adjust their tactics.

i'm leaning towards edwards too, but if i were an undecided voter, convinced that all the dems were otherwise interchangeable, and i had the chance to strike a symbolic blow for only one of my two pet causes, which way would i jump?

racism looks like the more tractable problem right now, with sexism so deeply embedded in all the corners of our collective psyche, that going for the easy one first makes sense. electing obama would be a small step that would reap huge rewards fairly quickly.

on the other hand, if a white male is elected yet again, i think it will be several more election cycles before a woman runs again, but that obama or another black man would run in 2012, or no later than 2016. this leaves me inclined to vote for clinton.

also, that iron my shirt dude just made me mad. :)

ps. choose whichever interpretation you like :-)
.
.
.
.
yep. every single word glorida steinem wrote in that op-ed is correct, including the part about some women being in denial about sexism.

i don't think you're going to get a chance to vote for another woman president for a long time.

it's too bad she's not running as a left-leaning republican. besides the fact that that's what she looks like from where i stand, it would do that party a heap of good on several levels, not the least of which would be all the religious nuts whose heads would explode. maybe they'd finally go off and form that 3rd party they keep threatening.

Hipparchia, I'll just put this out there:

Okay. But seriously, I think there should be women running in every presidential election from now on.

she sounds ideal, but would she run? it does no good to have perfect candidates if none of them want the job.

i'm hoping that hillary's campaign means that we'll have women running in every election after this one, but i'm not yet convinced that will happen.

I give Hillary Clinton mad props for running such a strong campaign, she has really demonstrated that a woman is a serious candidate for president. I have no doubt that people won't soon forget it. I will positively encourage women to run, if I can; I have a blog and I know how to use it. :)

I now think Obama/Edwards is the way to go this year, and 2012 presumably if they do a good job as I'd expect then they will be the candidates again, so it's kind of a shut out for women for the next eight years if it goes that way, but it would still be a heck of a positive change from where we are now in America and 2016 is a long time for very strong women candidates to build up a campaign.

Also (and I'm sorry for the serial commenting but it's what I do best), the presidency isn't everything. It is impossible for one position to be all things to all people. There are so many ways we can advance feminism in America. We need to pass the Equal Rights Amendment and that should be done immediately.

in no particular order ---

the equal rights amendment is so 30 years ago, it can wait a few more years. electing a woman president would be as big a step forward and i'd like to see that one happen first.

a woman would be fine, but hillary isn't the right woman? waiting for the right woman makes it very convenient, becauae the right woman is also going to be the perfect woman, and waiting for her will be like waiting for godot, only less [more] so because women will still be the lesser beings. meanwhile, there will be no such demands made of the men, they'll only need to be good enough.

mad props to hillary, indeed, but patting her on the head like that and waiting for her to go away like a good little girl is, at at the very least, condescending.

there are indeed so many other ways of advancing feminism besides actually giving women the same power as men. advancing women, on the other hand, will take just that -- giving them power.

i have a blog and i know how to use it

you know we could argue about it but what's the point, there's all those primaries to get through and my opinion has changed several times already, so there.

and i'm deliberately being a little shit because it amuses me and because i think you won't actually mind. if i thought you'd mind, i wouldn't do it.

okay, i'll stop goofing and tell you what i think, of course you can disagree with me, and there's no way we can possibly ever share quite the same perspective. i'm not a woman, after all. i like women. in fact, i love women, but that doesn't mean that i know what women necessarily want or need for themselves.

i'd rather not directly address the racism problem which barack obama does help with at least to as large a degree as hillary clinton helps women. but that is absolutely insufficent for my support, a number of african american candidates have run campaigns for president in the past but were not barack obama.

i was not a fan of the first clinton administration, to say the least. the issues that i had were considerably more substantial than the starr inquisition was concerned with. i would not vote to restore the same people -- note, not the same president, but the same group of friends and advisors -- under any circumstance that i can imagine. i could not give authority to them, so i would have to abstain at best if hillary clinton receives the nomination, much as i appreciate the need for a woman candidate.

fundamentally -- i do not believe hillary clinton when she says she will end the war in iraq. i don't believe she even wants to.

okay -- i'm not a black man either, and so i can't speak about that issue any more than i can feminism, except from my perspective as an outsider who tries to empathize.

but i believe barack obama when he speaks. i believe he speaks what he believes. i do not always agree with him. but that doesn't matter as much, as long as he's also a good person who will do the right thing. and he did the right thing by voting against the authorization of force in iraq.

as far as waiting for the right woman, i'm married and i did, so there.

okay, i've slept on it and i have another comment.

i want world peace. i want an end to war everywhere now and forever.

if that sounds too idealistic, whatever. i think people should just get stoned more and they'd chill the fuck out.

and i was meaning to say something about barack obama here, but then i went, yeah, whatever. love one another, it's not that hard.

well, me, it's a sunny day here and i'm headed out the beach to catch some rays.

world peace, can't argue with that.