Are they religious zealots, misogynists, or just plain idiots? 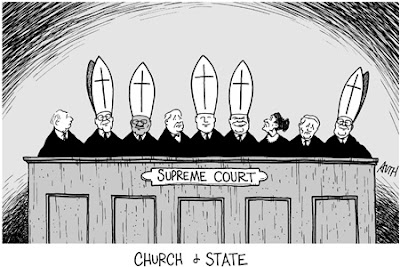 Lots of bloviating in the blogosphere as to whether this cartoon is anti-Catholic. I say it's not. Every single one of the Catholics on the Supreme Court voted to uphold the nation-wide ban on "partial birth abortion" [more properly referred to as intact D&E]. Every single one of the non-Catholics on the Supreme Court voted to to strike down that ban. It's the duty of editorial cartoonists to point out stuff like this, and to do so in a pointed manner too.

There's also the further bloviating on whether these Catholic judges really did let their religious beliefs influence their decision. I think it's very possible that they did, and I find this scary. If you read the entire opinion and the dissent, you can see that Supreme Court Justice Kennedy, who wrote the majority opinion, expends a lot of words on "moral" issues. This isn't conclusive proof either, but it's suggestive.

However, I'll save you the morality bit, and move on to the part that's really bothering me. Kennedy thinks there's legitimate dissent in the medical community on the health risks associated with various abortion procedures. He gasses on at length about this too, but here's part of it:

Here, by contrast, whether the Act creates significant health risks for women has been a contested factual question. The evidence presented in the trial courts and before Congress demonstrates both sides have medical support for their position.

These contentions were contradicted by other doctors who testified in the District Courts and before Congress. They concluded that the alleged health advantages were based on speculation without scientific studies to support them. They considered D&E always to be a safe alternative.

Ginsburg, on the other hand, goes right to the heart of that matter:

In this insistence, the [Supreme] Court brushes under the rug the District Courts' well-supported findings that the physicians who testified that intact D&E is never necessary to preserve the health of a woman had slim authority for their opinions. They had no training for, or personal experience with, the intact D&E procedure, and many performed abortions only on rare occasions.

So, which is it? Is Kennedy [and the other four concurring Catholics] too stupid to distinguish the real experts from the wannabe experts? Or did he just gloss over the opinions of the true experts because they didn't support his moral [read: religious] views?

Then again, it could simply be outright misogyny. Kennedy blathers on, in a most patronizing manner, about protecting the woman's fragile emotional state. Ginsburg blasts him for that too. In fact, she neatly tears apart all of Kennedy's legal, moral, and pseudo-scientific reasoning.

These are all disturbing thoughts, trying to discern the possible motivations behind the decision, but the scariest thing to me is that FIVE Supreme Court justices are either unwilling or unable to recognize who the credible experts really are here.
Posted by hipparchia at 4/22/2007 01:52:00 PM

"It seems unexceptional to conclude some women come to regret their choice to abort the infant life they once created and sustained," he wrote. "Severe depression and loss of esteem can follow."

Abortion is an issue I'm overall conflicted about, but this reasoning is tough to swallow. Not only are the big nine the finest medical minds on teh planet, they're also top-notch psychologists when it comes to the fairer sex. There are honest arguments against abortion, and then there's shit that just insults the intelligence.

oh no. i read the entire thing, all 73 pages, including that passage. that passage was one of the ones that really set me off. it's patronizing, vaguely misogynist, and if i'm not mistaken, there was scientific evidence presented in at least one of the lower court hearings that "regret after abortion" and post-abortion depression is much less common than depression during and after pregnancy.

also, i saw at least one article today saying that the number of unwanted pregnancies carried to full term [including live birth] have risen as the abortion rate has been declining. i didn't read the article carefully enough to find out if the mothers in these unwanted pregnancies change their minds once the baby is born.

Yikes! I only read the various reports on the opinion. I'm glad I spared myself 73 pages.

How do they measure unwanted pregnancies, you think? (Hospital visits, maybe? Do they ask if the baby's wanted in the delivery room?)

[don't worry, i'll bring back the word game. it's just an experiment.]

i forget where i read it, but they used a fairly simplistic measure: just asked, before you got pregnant, were you planning [or maybe they used "hoping" i forget the exact wording] to get pregnant?