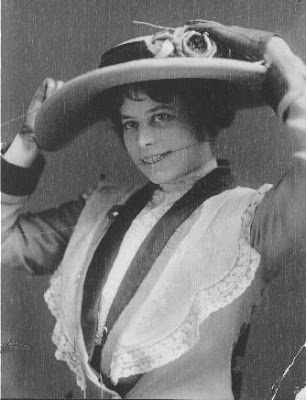 In 1911, the elegant Grace Miller posed in fashionable clothes. She and a partner operated The Ladies Tailoring College. Grace secured her hat with a long hat pin, and a second pin was held ready between her teeth. A breeze could send a large hat flying away, and pins through the hairdo and hat kept the hat in place.


Dave Nalle gives us a description of the partial birth abortion ban and wonders which way the Supreme Court will rule. Well, we need wonder no longer. Pseudo-doctors Anthony M. Kennedy, John G. Roberts Jr, Samuel A. Alito Jr, Antonin Scalia, and Clarence Thomas, practicing medicine without a license, have decided that "partial birth abortion" is never medically necessary "... because other abortion procedures are still available."

Yes, the phrase "partial birth abortion" is used in the text of the law itself, rather than the medical term "dilation and extraction intact dilation and evacuation." You can read a good description of the procedure, and when and why it is used here.

The Partial Birth Abortion Ban, odious as it is, does at least include an exception for its use if the mother's life is in danger, but it does not allow a physician to use the procedure for saving the mother's health. Only her life is of value, not her health or well-being.

The procedure is gruesome, even when described coldly and clinically and devoid of all the loaded words and images favored by abortion opponents. However, from my [admittedly frivolous] reading of hundreds of murder mysteries and true crime books, I have learned that one quick jab of the Victorian woman's hatpin to the base of the skull and the poor guy never knew what hit him. Whether this is true or not, I don't really know, but it strikes me as a better way to die [if you're unlucky enough to be a fetus with with gross abnormalities and no hope of surviving] than being delivered by caesarian section and then dying.

Do they give the poor little things some kind of pain killer while they're lying there waiting for the Angel of Death to swoop down upon them?

If you can stand it, the video is of a baby being delivered by caesarian section.

This is why, back in 2000, when some of my friends said they were voting for Nader "because there's no difference between the two parties, anyway," I begged them to reconsider.

you are my hero.

i sympathize with them, the third-party-ers, because so often you really can't tell the demopublicans apart without a scorecard, but you're right on the money about this issue.