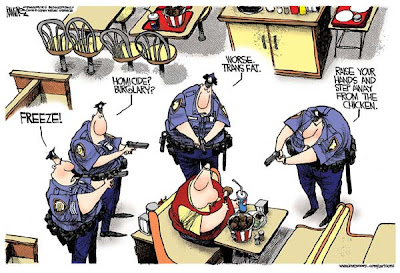 It's been a while since everybody was up in arms over banning trans fats. What people didn't understand at first [maybe they still don't] is that -- for once -- no, the food nazis were not trying to keep you from eating calorie-laden food. Instead, the point is to make restaurants serve you food, not some chemically-altered something-or-other thought up by food scientists. That stuff'll kill you.

Anyways, I was going to go into some explanations of cis versus trans fat, but it's already been the Molecule of the Day elsewhere.
Posted by hipparchia at 4/07/2007 03:35:00 PM

I had occasion some time ago to take in a movie in a neighboring country, up north. I got a popcorn and a coke, and you know what? They serve different stuff up there than they do down here. The coke is apparently still sweetened with sugar, and the popcorn is apparently buttered with, well, butter.

Not like any of that is good for you, or anything, but I found myself wondering how long it is the quality of what we eat (even the evil stuff) has been slowly eroding. The kids growing up with this stuff, these days, really don't know what they're missing.

It made me inexplicably sad. I mean if we're going to commit dietary suicide, it just seems that much more insulting to do so with crisco and corn syrup, instead of butter and sugar; not only will our deaths be pathetic and useless, but sadly tacky as well.

That pancake juice'll kill ya every time, that's for sure. Nicely put, TK.

My kids are chattering over there as they squabble over a basketful of trans fat horrors. Ick. It's real food for the adults, while kids mainline the sweetened garbage. Gotta target 'em young, I guess.

K (thanks for the link!)

mmmmm, biscuits! i make mine with butter.