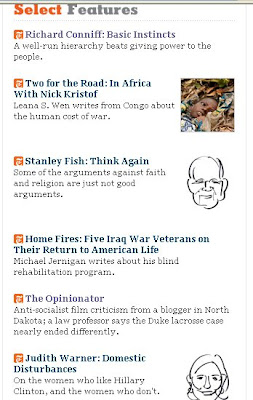 On the Times Select front page [from the link in your sidebar] I see these items listed on the right hand side of my screen. I was particularly interested in the one under The Opinionator ...a law professor says the Duke lacrosse case nearly ended differently.

I'm also interested in the Richard Conniff: Basic Instincts A well-run hierarchy beats giving power to the people, and Judith Warner: Domestic Disturbances On the women who like Hillary CLinton, and the women who don't.

A few weeks back a puff piece in a New Zealand newspaper extolled a trucking company that “has fostered an egalitarian culture … and does not believe in hierarchy, bureaucracy or superiority.” The same article also noted that company headquarters features this saying in bold text on a lobby wall: “The man on top of the mountain didn’t fall there.”
Are you sensing a mixed message here about the egalitarian ideal? (But, wait, maybe you’d better check with the boss before you get back to me on that.)
Modern companies often claim to embrace the egalitarian and disdain hierarchy. They like to boast that they have no reserved parking spaces, no executive dining rooms, everyone working together on a first-name basis and modest cubicles for all employees — even C.E.O.s like Meg at eBay, and John at Cisco. No hierarchies here, thanks, not us.
And I think they are fibbing.
In every human organization to which I have ever belonged, I’ve always known precisely where I stood in the hierarchy. And I bet the folks who work for Ms. Whitman and Mr. Chambers do, too. I’ve come to believe that our instinct for hierarchy isn’t merely an inevitable human condition. If we could just stop pretending that hierarchies don’t exist, we might even see that they can actually be beneficial.
A long line of academic thinking says the opposite: that hierarchy is a modern imposition on free-spirited, brother- and sisterly human nature. The traditional tribes to which we belonged through almost all of human history were fiercely egalitarian, according to anthropologists.
But the academics go wrong, I think, on several counts.
They mistakenly treat egalitarian gestures, like sharing food, as the mark of egalitarian societies. But these gestures often tend in the opposite direction; they are the means by which shrewd leaders consolidate power. I suspect that anthropologists also often fail to recognize hierarchies because hierarchies tend to be invisible. The etiquette is so subtle that even insiders conform to it without being fully conscious of it.
For instance, when primatologist Terry Maple got his first teaching job at a Georgia university, he thought tenured faculty would be free from tiresome hierarchical behaviors. (Go figure.) Then he arrived early for his first department meeting and found a seat in the third row. Another faculty member soon came in and stood impatiently at the end of the aisle.
“Well, what’s going on, Tom?” said Maple.
And Tom said, “You’re sitting in my seat.”
Maple got up and moved one seat over, and Tom said, “Now you’re sitting in Professor Smith’s seat.”
Having been trained to study behavior, Maple took notes in subsequent meetings and documented a rigid seating order, with proximity to the chairman reflecting relative power, even when the meetings moved to a new room. It was an invisible hierarchy.
We seem to have evolved to deny the existence of such hierarchies even as we subscribe to them with all our hearts. At one California company, for instance, subordinates — sorry, associates — stand outside the CE.O..s office and air-knock to get his attention, rather than brazenly rapping on the glass door. They think they’re just being polite. But it’s what any animal-watcher would call submissive approach behavior.
So how could this sort of thing possibly be beneficial? Aren’t the perquisites of hierarchy, like a bigger office or a better title, the cause of endless workplace bickering and politics?
On the contrary, a relatively settled hierarchy actually means less bickering, not more. Fighting is five times more likely to occur in chimp groups, for instance, when rank is uncertain. Roughly the same thing happens in corporations after a merger. But once a hierarchy gets established, ambitious subordinates (of either the simian or human variety) seldom mount an overt challenge, because it’s just too risky.
Having a strong leader who’s willing to act decisively can also make a group more effective at coordinating action toward some clearly stated goal. We may not like to be reminded of the hierarchy too openly. But we also find comfort, safety, and purpose within its boundaries.
Acknowledging this makes a lot more sense than the make-believe strategy of pretending hierarchy doesn’t exist. It becomes possible to talk about when the hierarchy isn’t working — when it’s slowing things down too much, or when the style of leadership is just too nice, or too brutal, for the task at hand.
Reminding yourself to pay attention to small acts of hierarchy can also help you understand how and why decisions get made: Who speaks first after the boss and does he sound a bit like an echo? Who plays hockey with the C.E.O. on Saturday mornings? Where does a subordinate glance in search of support when mounting a challenge? These subtle signals matter more than anybody likes to admit. At one company in Connecticut, where management likes to boast about its deeply egalitarian culture, all employees have email addresses on the lines of JaneDoe@widget.com.
But the founder’s email is IAMME@widget.com.
So here’s the tricky question: What do you do when a boss like that starts to boast that his company has no hierarchy?
Well, you could start up a good conversation by saying, “I don’t know, sometimes hierarchy isn’t such a bad thing.”
But if you’re like most of us, the odds are you’ll just smile deferentially and say, “No hierarchy? Oh, that’s so wonderful. Was that your idea?”

it was just there!

thanks for the other.

Ha! My client-before-last was a small company whose CEO liked to pretend to be pals with his tech employees; e.g., he liked to chat about music with me. Every employee already knew, and each contractor in turn learned, that the parking space centered on the main door of the office suite belonged to The Boss, and no one else parked there twice. It was unspoken... until someone unknowingly violated the rule. It was really silly; the parking lot was adequate, and no space was very far away from the entrance. But the rule was as real as if it had been published and distributed in the employee handbook. "IAMME," indeed.

My boss just persists in getting paid twice what I do. THe bastard.

K (but then, I admit he works harder)

late follow-up .. the Duke article was there, I remember seeing it. Curious as to why/how it disappeared (even Google -- "nearly ended differently" -- was showing it).

also, Novosibirsk did show up, but still so much to fill in! And I thought, you're too far south, but then i saw the latitude (54) and let that comment slide ..

some of us just need more latitude than others. google still brings up links for that duke one, but they all go to the times select front page.

that said, humans do like both predictability in their fellow humans and having clubs in treehouses, complete with secret handshakes.

From The Opinionator at the Times:

The prosecutor in the Duke lacrosse case, Mike Nifong, has been disbarred. K.C. Johnson, a professor of history at Brooklyn College, spent the weekend considering Friday’s North Carolina Bar Association hearing, and worries that things very nearly turned out differently. At his blog about the case, Durham-in-Wonderland, he writes:

Though the case ended as it should—with the AG’s declaration of actual innocence and Nifong’s disbarment—this was a very close call. First, the defense demanded and then closely examined [lab director Brian] Meehan’s underlying DNA data not as a matter of course but only because the DNA was the only evidence even remotely implicating Brad Bannon’s client, Dave Evans. Had [the complainant] picked a lacrosse player other than Evans, the DNA conspiracy might have passed unnoticed. Second, the State Bar’s grievance committee voted to charge Mike Nifong with ethics violations by a mere one vote, with grievance committee chairman Jim Fox casting the tie-breaking vote.