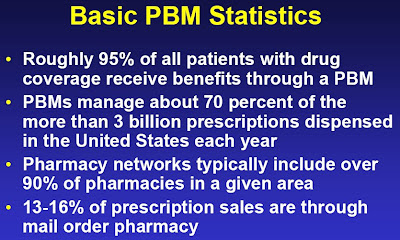 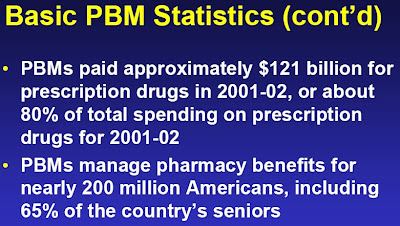 Are you thinking what I'm thinking? With a single-payer system, we could have one PBM for the entire country and all 300 million of us could participate. That second column, "Utilization," it should more properly be labelled "Rationing of Care." Here's the Wisconsin Medicaid protocol for DURs [drug utilization reviews], which is supposed to limit waste, fraud, and abuse, but they look more like ways to abuse poor people's privacy and limit their medical care. Patient profiling and physician profiling are just what they sound like, tracking which drugs patients take too much of and which drugs doctors prescribe too much of.

Just an aside, the same people who profile patients and physicians will audit your PBM for you too. How many layers of bureaucracy do you need?

Fourth column. Formularies are lists of "preferred drugs" which surprise! surprise! turn out to be the drugs that the PBM negotiates the best prices on. If the best drug for what ails you isn't in the formulary, it'll cost ya. Disease management programs are a bit of a HIPAA nightmare [HIPAA being a nightmare in its own right too]. 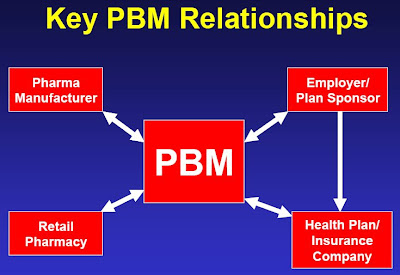 A finger in every pie... 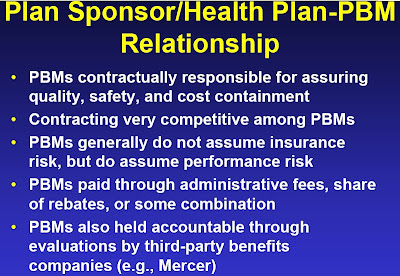 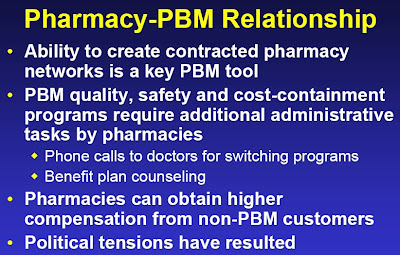 Political tensions have resulted. That should improve health care, when the pharmacy benefits manager causes tensions at the pharmacy. 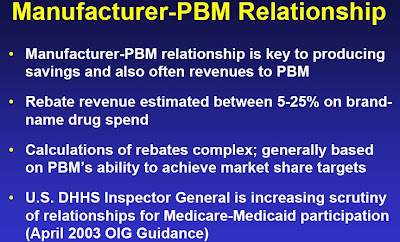 If you think a 25% rebate is high, California Health Care Foundation says it may be as high as 35%.

Increased scrutiny by the Inspector General for Medicaid participation? The headline at the bottom right reads Medicaid AMPs: PBMs out, mail order in. 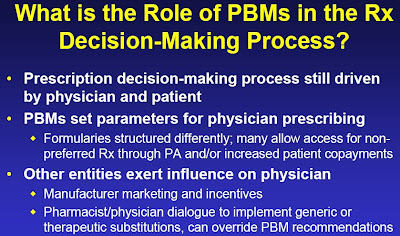 Sure, you and your doctor together make the decisions on which drugs you get, but with significant interference from people whose interest in their wallets is greater than their interest in your health. 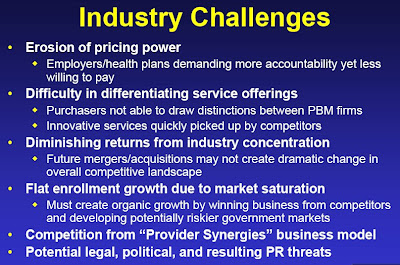 Potential legal, political, and resulting PR threats. I'm doing what I can to give them bad PR.

I had peanut butter muffins.

Do you ever get the feeling that the differences are only ever language? Those horrible Europeans have rationed care, but we have "utilization," so shut the fuck up and join the chorus of "USA!".

The other thing is that it seems like the way to get rich in this country isn't necessarily hard work and education (you know, the good conservative narrative), but finding the right bureaucratic niche and then start charging. I suppose it's innovation in its lame-ass way, but it also strikes me of party appartchiks being the successful members of uglier political systems.

Finally, Betty the Crow had a pretty good series of health care posts a couple weeks ago. Did you catch them? (I plugged you over there too, unrelatedly.)

grind your own. peanuts, that is. i wore out two blenders before i found a store that sells bulk peanuts and has an industrial-strength grinder you can put them through. almonds too. mmmmm good.


i missed the btc series [i haven't been getting out into the world much lately]. i'll definitely have to read it. is this it?


the problem is that the differences you speak of aren't just in language.

in all those evil "socialized medicine" countries, they make some attempt to ration care based on who needs it most and who was first in line. stuff you learned in kindergarten. fairness and helping out your fellow beings and humanitarian shit like that. also, not all their care needs to be rationed. also, france has doctors who make house calls [you're probably too young to remember this, but it used to happen here too].

here it's all about corporations keeping as much of your money for themselves as they can, and they typically only release it to those who are both strong enough and savvy enough to fight tooth and nail for it.


you are so right about those bureaucratic niches.

No, but the argument often seems to be a battle of dumb semantics. The same assholes that thought "freedom fries" was a coup (er, victory)?

That's the btc link. I don't know if you saw my comment on daveto's by the way, but I think throwing the damning and debunking numbers around like this is great. More people should be aware of them. (I guess no one wants to do homework.)

[actually it did, but i'll ignore it if you like]


i did see your comment. yes, the industry is as transparent as pond scum, so it's difficult to find any numbers, let alone convince people they're important.

those would be ceiling ducks, i take it.

houly: I see them hourly.