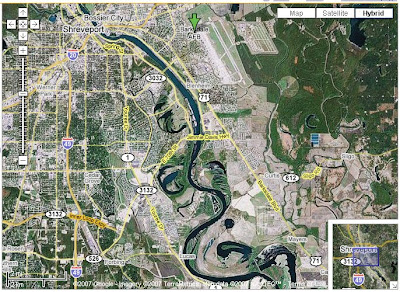 Q: What can we do about New Orleans? It's been 2 years, the place is a disaster, we've had 2 category 5 hurricanes already this summer, and the season is just now getting really hot. Besides, we've still got Mississippi to put back on the map.

A: We'll just nuke it! One B-52 with about a half-dozen or so cruise missiles, complete with nuclear warheads, ought to do the trick.

Oh, wait. Not headed for New Orleans, headed for Shreveport instead, to some Air Force base there, to decommission a couple few useless old missiles they had lying around in North Dakota. Yeah, riiiiight.

Beyond a few interesting curlicues in the Red River, Shreveport has nothing much to recommend it. You'd never miss it if they nuked that place. I'd never miss it anyway. I can see how Soybean Steve might disagree, though it's a bit fuzzy just exactly which Red River Valley the song is talking about. All of them, maybe.

From the CNN article:

Shepperd [a retired Air Force major general and military analyst for CNN] said the United States had agreed in a Cold War-era treaty not to fly nuclear weapons. "It appears that what happened was this treaty agreement was violated," he said.

The Air Force announced that all flights of fighters and bombers in the United States will be halted on September 14 to allow for a review of procedures.

Once the mistake was discovered, the Air Force immediately began an inventory of all of its nuclear weapons, a military official said.

One could hope they might be looking into who authorized putting a nuclear warhead on the cruise missile, because the missiles are stored without warheads.

"what are they planning to do for the next 9 days?"

Certainly not count their brain cells. That should take less than 10 seconds.

they're not going to ground any fighters and bombers for another week and some-odd days, but they are going to start immediately looking for nuclear weapons?!

what? they're accidentally-on-purpose going to find out that oops! some warheads slipped the leash and are now over there in the general vicinity of iran? i'll grant that it's possible that they just want iran to wonder if some lost and lonely nukes are headed that way, rather than they've truly decided to re-enact a perversion of ww2.

anyways, i'm betting they'll find a scooter libby or lyndie england to take the rap for this one.

i dunno, steve, you can't count something that you can't find.

Nothing new under the sun. 35 years ago when I was an army officer, we were misplacing weapons. No nukes maybe, but who really knows.

For the next 9 days?

Lessee... Iran is supposed to only take three days... so I guess Syria, Jordan, North Korea and maybe Venezuela.

And then we win!

At least that's what it says in the Neocon agenda book...

One thing that may or may not be significant: it's not nuclear bombs they flew; it's nuclear-tipped cruise missiles. If this was intended to rattle sabers in Iran's direction, it was IMHO a credible rattling... and we can expect a credible response. If not... if it was intended only to scare the crap out of us in the U.S. of A. ... well, in my case, it worked pretty well at that, too. But to what purpose? The Bushists do things only from power-related or wealth-related motives, and I don't see how this helps them either way.

if it was from wealth- or power-related motives, steve, most of us would find their motives and [lack of] reasoning foreign.

No nukes maybe, but who really knows.

you're right, nick. we don't really know, then or now. scary.

Lessee... Iran is supposed to only take three days... so I guess Syria, Jordan, North Korea and maybe Venezuela.

And then we win!

ellroon wins! i'll admit i hadn't thought of taking out a few other countries on the way. also, i hear these when i read your comment, ellroon.