If you don't stop doing that, you'll grow three heads! 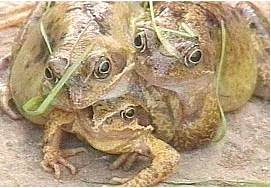 Gone herping lately? If so, maybe you've noticed that frog deformities seem to be on the rise, or at least in the news. Our amphibious friends are apparently the canaries in the environmental morass that we're all living in, and if extra legs can happen to them, how much longer till it happens to us?

So when some kids found a three-headed frog, the BBC sounded the warning and called on its resident wildlife expert, who was stunned by the ramifications. Now one would think that a naturalist with a masters in ecology would have recognized amplexus [that's amphibian for kinky sex] without having to consult color-coded pictures. Sheesh.