Happiness is a warm puppy 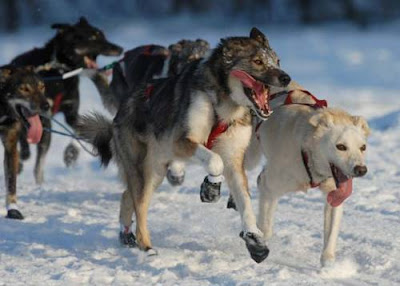 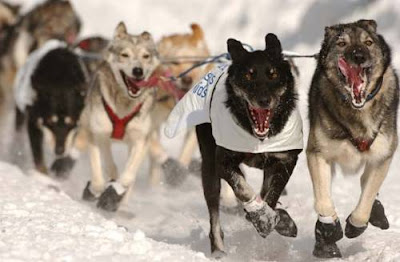 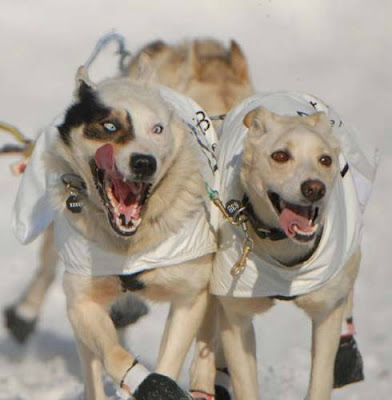 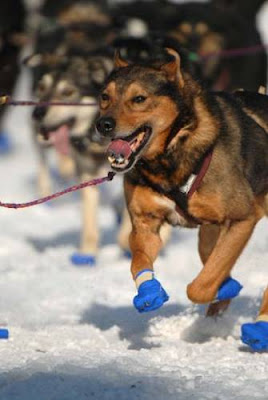 I came by to ask for a link. I blogrolled you around B.A.D., under the impression that you had an open blogroll policy.

You notice that you don't see any fog from their breathe and their tongues are hanging out to expel extra heat. They are on snow, but the temperatures are up.

i can be bribed [we love catnip here at chez hipparchia and you did offer quantities of primo stuff, iirc], but bullying won't get you anywhere except de-blogrolled.

i added culture vultures and la casa de los gatos shortly after your generous offer of catnip because i very much like [in no particular order] john lee hooker, cats, spanish, politics, feminism, and the subversive spirit of b.a.d.

other than that, stuff appears in [or disappears from] the blogroll if and when i feel like it. plays well with others was never a prominent feature on my report cards in school.

yep, those are some very warm pups indeed. when dogs' tongues are hanging that far out of their mouths, it's roughly the equivalent of us floridians mowing the yard at 3pm in august.

i did love the slightly demonic looks on their faces, with the long tongues flapping in the wind from wide open mouths. and even as hot as the work is under those condtions, most of the dogs in the photos do still look happy to be running.

Looks to me like there are a few yaller dogs in there...

i made sure of that, steve!

hipparchia, here's a completely off-topic post about two fans of yours...

Site outage notice... The Yellow Doggerel Democrat site's host has suffered a major problem following a catastrophic power loss early Sunday morning which killed a lot of servers. The site has been down and up and down (currently down) for about 12 hours now, and while I've been notified they're working on it, I don't see things coming back right away. My alternate Blogspot site, which you may want to bookmark, is the YDD Annex. There's not much there at the moment, but it has been my alternate site for more than three years now.

Bryan of Why Now? has the same web host as the YDD; he seems to have set up temporary quarters at the Why Now Annex. Hey, don't miss your Iditarod fix! :)

y'all would be supper, nick, or at least alex likely would, as small furry creatures are usually only food in the eyes of sled dogs. humans they usually regard as friends and bringers of food.

the problem with bookmarks, steve, is that i quite literally have hundreds of them, maybe more. ditto for the number of icons on my desktop. and now the rss feeds are beginning to accumulate.

kinda like my cats and your problems with technology [accumulating].

but thanks for the links and the heads up. i've added the annexes to my gaggle.

hipparchia, I'm not seriously advocating bookmarking my alternate site. Except that if you don't, and my main site is down, you can't get the URL from my main site...

The YDD appears to be back up again. Regrettably, Bryan's blog, which truly requires MySQL, is not...

weeeelllllll, i would blogroll y'all, but that's getting out of hand too....

of course i've got them bookmarked now. i just made that earlier [but still true] comment when i came up for air after wading through the current crop of global warming denialists that i've highlighted for your reading pleasure.