They said it better than I could, plus it has links, so here's one from the inbox, in its entirety:

Yesterday, the right-wing think tank Competitive Enterprise Institute (CEI) unveiled an advertising campaign intended to provoke fear about solutions to global warming. The ads also make specious claims about former Vice President Al Gore's own energy use. In CEI's words, "The ads contrast Gore's energy-consuming lifestyle with the life-and-death need for energy in developing countries." The $30,000 campaign, set to run for two weeks on CNN, CNBC, and Fox News, includes a 60-second television spot and a longer web video. Despite decrying the "alarmism" of those who advocate fighting global warming, CEI is happy to use false alarmism in its own attacks. At the press conference, CEI's General Counsel Sam Kazman said that climate change legislation of the kind Gore supports would herald "death on a massive scale" and "absolute disaster, suffering, and starvation on a massive scale" in the developing world. Today's Progress Report sets the record straight.

CLUELESS ALARMISM: CEI claims that combating climate change means "restricting access to affordable energy," a "sure recipe for increasing poverty, disease and human misery around the world." CEI's alarmist claims not only ignore the very real threat posed by climate change to the developing world, which would face food shortages and devastating drought. Moreover, the Kyoto Protocol, adopted in 1997 and now ratified by 174 nations -- including the European Union, China, and India -- recognizes the different economics of developing and industrialized nations. Industrialized states, which have achieved prosperity over 150 years of development without having to account for global warming pollution, are expected to meet stricter emissions standards, while developing nations are expected to engage in a more gradual transition to low-carbon economies. These guidelines have been embraced by the leaders of practically every nation on earth. Even major Fortune 500 companies have endorsed significant reductions in greenhouse gas emissions. At the Bali conference this past December, leaders of developing nations shamed the American, Canadian, and Japanese delegations into action.

ATTACKING THE MESSENGER: CEI's TV ad begins: "Here's the electricity we use at home. Al Gore uses twenty times as much." This claim is based on a 2006 figure constructed by then 24-year-old Jason "Drew" Johnson, who started the Tennessee Center for Policy Research (TCPR) in 2005. Gore's private residence, which includes his home office, is indeed considerably larger and more energy-intensive than the average Tennessee home. However, since Gore purchased the home in 2002, he has transformed it into a model of best practices through extensive renovations that include a geothermal pump, rainwater-collection system, solar panels, and LED bulbs (despite the incandescent bulbs used by the ad to portray his purported energy use). He now has one of the first 14 homes in the United States to receive the LEED gold certification for efficiency and green practices. The still-ongoing renovations have "cut the home's summer electrical consumption by 11 percent compared with a year ago." The television spot also refers to Gore as the "chief spokesman for global warming alarmism." While Gore has certainly become the public face of climate change activism in the United States, he is by no means alone. His 2007 Nobel Peace Prize was shared equally with members of the Intergovernmental Panel on Climate Change (IPCC) "for their efforts to build up and disseminate greater knowledge about man-made climate change, and to lay the foundations for the measures that are needed to counteract such change." The IPCC reports, which specifically recommend "energy infrastructure investments in developing countries...to achieve GHG emission reductions," are consensus documents authored by thousands of scientists and approved by government representatives from around the world, including the Bush administration.

THE COST OF 'FREE MARKET': Since its founding in 1984 by Fred Smith, Jr., CEI has championed its own unique vision of the "free market" -- the right of various industries to endanger the environment and the health and safety of the American people. Funded by Philip Morris, CEI opposed tobacco regulations "as being harmful to individual choice, freedom of speech, and most ironically of all, public health itself" [CEI, 1/19/99]. Funded by Ford and General Motors, CEI filed suit against fuel economy (CAFE) standards. Funded by Pfizer, CEI used AIDS to argue that "the FDA's role in reviewing new drugs should be solely advisory" [San Diego Union-Tribune, 11/6/89]. Funded by the Chlorine Chemical Council, CEI "expert" Michelle Malkin conflated dioxin with chlorinated water.

THE HEADS-IN-THE-SAND COALITION: CEI, TCPR, the National Center for Public Policy Research, the climate-denier-conference Heartland Institute, and the two other names on Drew Johnson's resume -- the National Taxpayers Union and the American Enterprise Institute -- are all members of the State Policy Network, a "voluntary and by invitation-only" coalition of free-market think tanks. CEI presently sits atop the "Cooler Heads Coalition," a global warming skeptic propaganda machine which also includes NCPPR, Heartland, NTUF, and AEI. Those five organizations alone have directly received over $5 million from ExxonMobil since 1998. Outside of the confines of CEI and its network, as the Wall Street Journal recognizes, "the national debate, however, is trending more towards Gore's view of the impact of global warming.


that office, though, do want 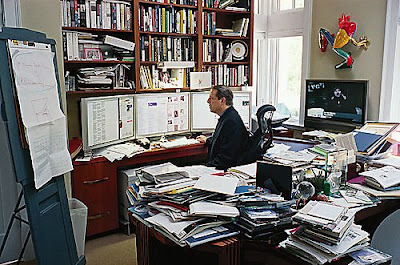 That's the ultimate in a blogging station.

They have to spread the agitprop for fear people will figure out what they've done.

You the market solution is to make those who created the problem pay to clean it up, which encourages people to stop polluting.

it is that. lots of piles of paper for cats to sleep on too.

you're right about their keeping people from noticing what they've done. it's been an effective tactic for a long time.

superfund, windfall profits tax... for starters, we need to bring these things back.

Well, the energy shortages, however far down the line they are, may not be due to any voluntary adjustments. I guess there's that.

Caught this today. The sun argument doesn't even show much correlation, at least over the past 50 years.

thanks for that link, keifus. i'd seen that mentioned off-handedly in a few comments around the blogosphere, but nobody had provided any links.

Damn... like Bryan, I'm in the business, and my workstation doesn't look anywhere nearly as well-equipped as Al's. That's a nice-looking place to work. I do wonder what Al does that requires three displays, though...

CEI will probably escape the brunt of the consequences for what it is pitching, thanks to the utter irresponsibility of the so-called "mainstream media." If you've ever read Paul and Anne Ehrlich's Betrayal of Science and Reason (1996), you know where this is going.

i haven't read that one. i'll have to add it to the list, the list of library books.

i don't know how al does it, but i could fill up 3 widescreen displays, no problem, without even trying.