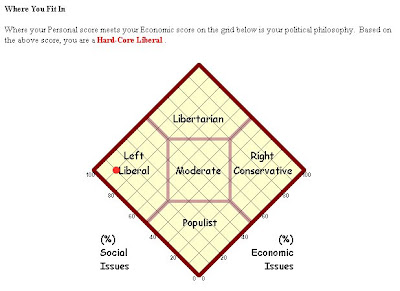 The last such test I took, several years back... and I do not care to take another... was called Political Compass, and its two axes (as best I recall) were Left/Right and Authoritarian/Libertarian. At the time, the Liberal Coalition (note the owl in the left column of my blog) was very active. Many members took that test, including me, and I was the most left/libertarian of its members, even including our leader, NTodd of Dohiyi Mir. Are there bloggers to the left of me? Certainly; terrette comes to mind. Are there more libertarian bloggers? um, let's not make jokes here; of course there are. But it's a pretty good classification of me.

Except... there's this populist streak that anyone who grew up in my family is certain to have acquired... All generalizations are false, including this one. :)

political compass: i turned out to be seated in lotus position, humming whatever the tibetan for om is, just to the left of the dalai lama.

all generalizations are fun, including this one.

Slide that dot up and right on its gridline, so it sits on teh left/lib divider. There I am. I suppose it's not a surprise.

As usual, the questions were a little lacking. Would I allow prayer in schools? Why the hell not? But I sure as hell don't think any school authorities should be endorsing or condemning the practice. Interestingly (not really), the summary questions were different from the ones asked. That one turned into "should the schools teach family values," which I would have opposed worded that way.

Ha! My dot was exactly where Hipparchia's was. And, henceforward, Keifus will be known as a right-wing nut case. Relatively speaking.

You'd be half correct. Objectively speaking.

and when i took we fraysters took the political compass test, the only guy more liberal than i was montfort.

(though pidge edged me out in the economics...)

btw...on this test i was a "hard-core-liberal...even though i support gun rights and the death penalty.