Crookeder than a dog's hind leg 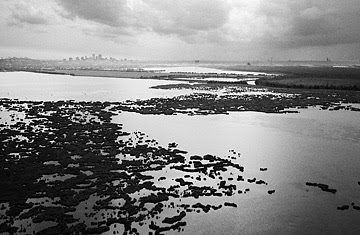 Louisiana politics, that is. And possibly the Army Corps of Engineers too, though they're probably more in the mold of when all you have is a hammer, everything looks like a nail.

Pretty much everybody now, even the Corps and the crookedest of politicos, recognizes that the only way to save New Orleans is to and quit building levees and channels and to restore the wetlands.

That last may be an impossible task by now, with so much of the land south of New Orleans sunk into the gulf over the years, no new sediment from upriver washing down to rebuild the delta, and much of the water supply for the remaining land suffering from saltwater intrusion. The huge cypress swamps that used to lie between New Orleans and the Gulf of Mexico, providing a buffer against storm surge, are gone. They're not likely to come back anytime soon either. Cypress trees love standing around in water up to their knees, but not if it's got salt in it.

Which may explain why, even though every-fucking-body knows it's not the right answer, they're planning to spend all the money building the Great Wall of Louisiana.

Do you really think that today’s Louisiana is crookeder that when Huey “The King Fish” Long was governor?

"when all you have is a hammer, everything looks like a nail"

One of my all time favorite "sayings." Which I forgot. Thanks.

You can start by slowing down the Mississippi so the sediment has a chance to drop along with all of the fertilizer that creates the oxygen-free zone in the Gulf. The close the MRGO [Mississippi River-Gulf Outlet] which provided the extra pressure on the flood walls.

You allow the outlet to spread out to a normal fan shape which will flush the salt and allow for formation, inside of forcing everything out one main dredged channel.

Finally, where necessary, you build levees, not flood walls. Real earthen berms that you can drive along the top and see when there's erosion or other problems.

They also need to advise people to put a drain in private levees, so that when they get flooded by a storm surge there's a way of draining them without pumps.

close the channels for sure [i don't think the mrgo is the only one they've got] and don't build any of the new ones that have been proposed.

there's even talk of freeing the sediment from behind the locks and such upstream and letting the river carry it down to the delta.

you're right, 50 miles of cypress swamp would not only hold sown storm surges, it'd suck up the nutrients [and a lot of the pollutants] that we're now dumping into the gulf.

what a concept, letting nature take its course. it's downright un-american, not to take hammer in hand and build and bend everything to our will. also, that course would take time and sitting on our hands waiting 10, 20, 50 years is just not something we do here.

i dunno, bryan, you'd better watch out. they might have you up on sedition charges or something.

ds, you're welcome. it seemed appropriate, given that the whole mission of the corps is to build stuff.

hey, nick! thanks for that reminder.

i would guess that things are probably less corrupt now overall, and that a lot of the problem is inertia. we've always done it this way: politics as usual, some corruption tolerated, gotta take hammer in hand and come up with a quick fix, or at least look like we're doing something so we can get re-elected.