Quote of the day, from Ethanol Under Fire, David Pimentel [down the page a bit]:

Actually it's Big Ethanol and Big Corn that are under fire by Big Oil, though Big Corn and Big Agriculture are a major client of Big Oil. We tend to think they might all deserve each other.

Anyway, it's a webpage of commentary about and links to debunkings [by reputable folks, it looks like] of Pimentel's ethanol, uh, research. I haven't read all of it, but, here, I give you some points: 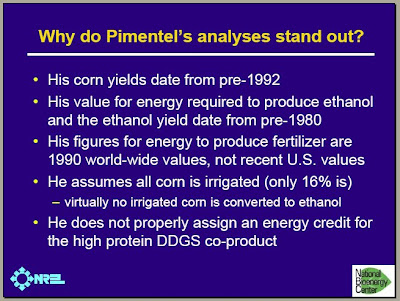 you can see the entire PDF here
That last bullet item, DDGS, dry distillers grains with solubles, highlights the fact that maufacturing processes, including the production of gasoline from crude oil, rarely produce just one product. The very same bushel of corn that's feeding your cars is also feeding your cows, [and bringing other good stuff to your life]. Ethanol advocates say you have to count some of that input energy towards producing the cattle feed [and other products], instead of counting all of it towards producing motor fuel.

It's a valid argument. I don't know yet if the Pimentel refuters are calculating the same for fossil fuels -- how much of the input energy goes towards producing the other products that happen when you make gasoline -- but I hope to find out.


Much as I applaud his conservation-mindedness, and yes, he's right about one thing -- all our energy usage is essentially a net consumption of the earth's finite resources, no matter what form that energy takes -- life really is too short to spend in the company of David Pimentel. I'll mention briefly a couple of other points and then hope to not think of this guy again, for a while at least.


Aside to Arch: ultimately you may prove to be right, and I wrong, about teh burdz and teh kittehs, but Stanley Temple's "research" [and unfortunately also his reach] is on a par with Pimentel's.

Labels: biofuels, ethanol, keeping an eye on the opposition so you don't have to, pimentel

No argument--the cat vs. bird research stands up without Temple. And you know I'm not anti-cat, I'm just pro-bird.

About the ethanol--anything that threatens our nations's supply of alcoholic beverages is evil and must be stopped...Save Jack Daniels!

Ah, but there's always barley! Take that corn monoculture! (And you can make vodka out of just about anything though I can't imagine why you'd drink it.)

I don't have time for a substantive comment but...

- I have a favorable impression of NREL. Sane and serious from teh solar energy side of things.

- Corn and oil deserve each other? Yeah, I can get the sentiment--and have probably even expressed it; corn as it's practiced is a little creepy with big worries about sustainability--but "creepy" is kind of aside from "analysis".

- When the finite lifetime of the sun (or the core temperature of the earth) is our biggest worry, I'd say we're doing OK.

David Pimentel became one of the board candidates in Richard Mellon Scaife's attempt at a hostile takeover of Sierra Club a few years ago. I knew very little about Pimentel until then, but what I saw then and what I've seen since does little to make me respect him.

Full disclosure: I was on the executive committee of the local Sierra Club at the time. Separately, I was also part of the activist group that staved off the takeover attempt. FBOW, people trust what they hear from Sierra Club, and the notion of seeing Scaife in control of the Sierra Club "brand" was truly frightening to me. That Pimentel lent his "respectable" name to that effort spoke volumes about his motivations.

Oh, I forgot. On the business of taking food from starving children, Frances Moore Lappe and later Anna Lappe have written for years about the gross inefficiency of the American system of food production. Indeed, Diet for a Small Planet (search Amazon; you can still get it) was one trigger in my decision to go ovo-lacto-veggie, though it took me another decade after its publication to commit. As best I recall, F. Lappe was concerned mostly with the grain protein to beef protein ratio, rather than the fuels used in production, but my memory is notoriously bad.

Sorry I can't manage to be vegan or a teetotaler, but I'll do what I can.

big corn is creepy, and it only gets creepier if you analyze it. i tell you this from both insider knowledge and outsider analysis. your gut isn't lying to you on this one.

When the finite lifetime of the sun (or the core temperature of the earth) is our biggest worry, I'd say we're doing OK.
amen, bro.

on nrel, thanks for that input. i haven't spent enough time [yet] researching them myself.

can you point me to some studies? all the ones i've seen have been very pick-apart-able, but i'm a scientist first and feral-cat advocate second, so i'm at least marginally persuadable on this one.

till then, though, all the anti-feral-ists look like apologists for continuing to use pesticides and mow down habitat. not to mention the neanderthals who just want one more creature they can kill legally.

diet for a small planet was my very first vegetarian bible [quarter-century-ish ago], given to me, used, by a fellow treehugger. ami good or what?

i had sort of heard that about the sierra club, but hadn't paid enough attention, nor did i know about pimentel's connection. i'll have to spend some time with your link [in your other comment]. thanks.


i'm mot a tee-total vegan either.

Sorry I haven't answered sooner--I've been out of town, plus, I've been adopting a stray cat, and that's labor-intensive (blog post coming soon). But look here for one pretty good article on cat-vs.-bird action. And, yeah, they're all pick-apartable, just like research always is.