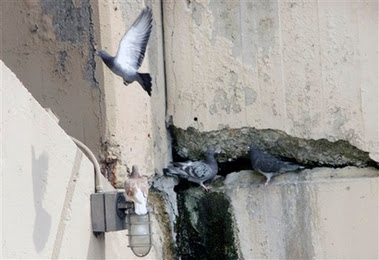 when you've got pigeons?

"But it's not against any religion / To want to dispose of a pigeon." - Tom Lehrer, "Poisoning Pigeons in the Park"

When the movie about the bridge collapse is inevitably made, they may have to title it, "The Night of the Guano."

I know; I know... it's a genuine tragedy, and a society-wide problem we all face. But sometimes I just have to be rude about it all...

ah. thanks. i forgot that.

Bah! It's anti-bird propaganda! First the bird-flu brouhaha and now this crap...uh...I mean....stuff...

I thought pigeons were "rats with wings."

i hear that about seagulls too, ds.

tepgku: they're watching me. i just left a comment elsewhere in the blogosphere about tengu.

Falcons are the answer...except they would be dropping pigeon bits all over the same area.

How about jet packs for feral cats? That's the ticket.

I don't thing the Japanese envision a pigeon when they see a tengu.

oh, i dunno, i can see a certain resemblance. it would be a clever disguise, pretending to be a pigeon.

falconry isn't getting it [though that would be my first choice]. i didn't notice an appreciable lack of pigeons when i was in nyc a couple of years ago.

i like the jet packs. in fact, i think my little tengu-wannabes already have them and they're just not telling me about it.