Why are these people allowed to do math?

The Fraser Institute is an independent research and educational organization with offices in Vancouver, Calgary and Toronto. Our mission is to measure, study, and communicate the impact of competitive markets and government intervention on the welfare of individuals.

I was researching another topic, thinking the Fraser Institute might have something to say about it [they do], when I stumbled over this little gem: Canada's Drug Price Paradox 2007. Self-annointed healthcare wonk that I am, I couldn't let it pass without comment.

Apparently Canadians pay about twice what we do for a generic prescription [we pay $9.39 on average for generics], but only about half what we pay for a name-brand prescription drug [they pay $51.12 on average for name brands]. According to FI, this is because the Canadian government artifically props up the prices of generic drugs. If Canadians were allowed to buy generic drugs as cheaply as we do, they'd save a ton of money.

Unfortunately, the author assumes that [a miracle occurs] the name-brand prices in this hypothetical free drug market will be just what they are now in the controlled Canadian drug market, even as the generics fall to American levels and that the percentage of Canadians [44% right now] choosing generics over name brands moves closer to the American percentage [63% of us].

Yep, apply the American model and those upper prices will be staying down at Canadian levels, not shooting up to astronomical American levels. I'm thinking the only way that will happen is if the evil manipulative Canadian guvmint steps in and artificially holds down the prices on name-brand drugs. 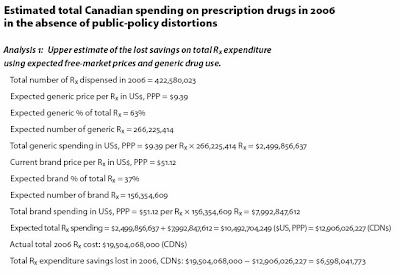 Labels: cartoons, health care, keeping an eye on the opposition so you don't have to

The PR firm disguised as a think tank that is the Fraser Institute doesn't even really try to convince Canadians of their nutty views on health care anymore. Nobody up here is buying. Their primary role these days seems to be to provide Americans with an endless stream of deceptive rhetoric about how Canadian style health care is a horror show that Americans should avoid.

Giuliani even hired a Fraser Institute alumni as one of his health care advisers - her job will be to provide vaguely coherent sound bites against the single-payer alternative.

Really, they really are just a paid PR firm with pretenses to academia. The Institute takes money from insurance and pharmaceutical corporations - so they're against public health care. They take money from the energy industry, including millions from Exxon alone, so they insist that global warming is a myth - they even took money from the tobacco industry and then fulminated against any kind of anti-smoking legislation.

Nobody up here who knows anything about them takes them at all seriously.

Thanks for finding that cartoon. I first saw it several decades ago. You've done your bit for the welfare of individuals (or at least one of them) today.

Well, that certainly looks like a stupid assumption to me.

I don't really know anything about the Fraser institute, but that's a handy math trick. I'll have to be sure to remember it.

Kind of related, I've been wondering lately (and sort of offhandedly) what's to the argument that the U.S. market floats the price of drugs elsewhere (as we're able or willing to pay for it), keeping prices low elsewhere.

Actually, your Canadian example suggests that we're dodging supply and demand (if name brands were priced less, presumably more people would buy them, as they do up north). A lot of hay is made about drug research (who else will solve the ED crisis?), and while I suspect these expenses are overstated (relative to, say, marketing), US companies do employ a lot of scientists and pay them pretty well.

Neither of those things are answers, just some rumblings of what I'm thinking about along those lines.

you asked for it, you got it [some of it, the expenditures on r&d vs marketing, i was already working on that]. unfortunately, i'm clueless on how best to attack that we're floating the rest of the world's drug markets meme.

i first heard of the fraser institute from their [in]famous annual reports, waiting your turn, on waiting times in canada. wankers.

steve, it's the very best science cartoon ever published, by a cartoonist i like a lot. i was thrilled to finally find that site.

lots of good information there. thanks for the links, and thanks especially for dropping by and saving me from feeling compelled to devote any more of my time to the fraser "institute."