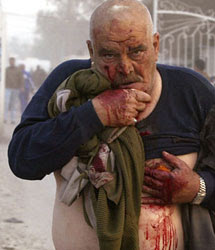 Looked like Jesse Ventura after a "legislative session" with Rowdy Roddy Piper.

Okay. Preamble: I was wrong on Iraq, was quite vocal in my prediction that there would be no war. But I learn from my mistakes! (What I didn't give enough weight to was the perceived winnability of the war.)

There won't be a war. Land war is impossible, so the the only possible war is an aerial bombardment. But with that you're not even going to get confirmation of what was hit, just some Al Jazeera footage of dead, dying, and wailing Iranians. Plus there's no succession planning whatsoever, so at best you set them back a few years while buying yourself a mortal enemy for life.

(Or not .. usual disclaimers.)

heck, dude, i didn't really believe we would invade afghanistan.

disclaimers noted. and appropriated for future use, if needed.

Well, it would certainly set up an interesting power struggle in Washington, I think. The US president has altogether too much power to unilaterally commit offensive military acts.

I wonder if congress would consider impeaching the man, if he struck Iran. Maybe that would be the egregious sin that would push them over the top.

It's difficult for me to believe that there is a single person in Washington telling him this is a good idea - disastrous from any viewpoint I can imagine. Would this mean the man was insane? Would a competency evaluation be too much to ask for?

Can we simultaneously snare Cheney? Because the thought of ousting the prince of darkness in favor of the king of darkness doesn't seem all that favorable to me.

we're all military experts compared to the commander-in-chief.

then again, it depends on your objectives.

anyways, in an earlier post i suggested we impeach cheney. i didn't give my reasoning, but it was along the lines of: "first we see if bush is more manageable without cheney pushing from behind; if not, then we impeach bush."