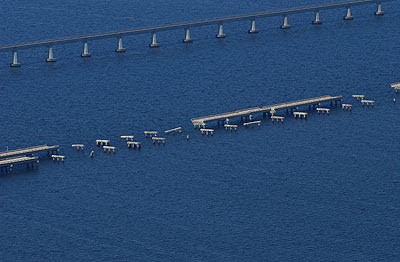 See those little toy building blocks scattered in roughly parallel lines across the picture? They're pilings. Bridge pilings. From an interstate highway across a bay. The day after the surge. More pictures of the same devastation here.

This photo was probably taken only a few hours after the surge passed by. NOAA's tagline:
Turn Around,
Don't Drown.

The bay is about two miles wide where the bridge crosses, and the water is about 10-15 feet deep. People who know about this stuff estimate that it took a storm surge, a wall of water, 30-40 feet high to dislodge those huge concrete slabs.

The only surge I expect to see from Bush's latest [ahem] plan [cough cough] is a surge in the number of flag-draped coffins arriving here in the US and rolling out of the bellies of big ol' jet airplanes. Not that we're going to be allowed to see those.
Posted by hipparchia at 1/10/2007 08:43:00 PM

Not to give away all my good posting materials at once or anything, but MBA Bush's "surge" sounds suspiciously like a manglement iniative--you know, like "world-class excellence plan," "super-high impact team" (note the acronym), or "quality hour," stuff that sounds real impressive, but doesn't amount to anything more than extra meetings for a few months until everyone forgets about it.

yes, but be ready for a blizzard of sunny news howling in from the east.

yes, it does look an awful lot like he's stalling till 2008 when he can hand over the baby with the stinky diaper.

like you, i like extreme weather. the dogs and i went for a walk while the eye of ivan was passing over us. heh, not so long ago, i used to check the weather forecast before going out into the field every workday.

as for that howling from the east: did i call it? i hope not. i hope i'm dead wrong on that last sentence.

and here all this time I thought you were just the creme de la creme of commenting lurkers. You should top post some of these gems over in BOTF, although the inability to include the visuals is a drag I guess.

btw, the other day I happened to notice a comment you made to me in reply to that plagiarism post. Without belabouring the topic or reviving it, just wanted to say "thanks" for what you said there.

i thank you for the kind words [especially that creme de la creme bit. smooches!]. i'm still your basic lurker over in botf, mostly because i only sporadically visit there [sometimes real life gets in the way; other times, well, you know, those hamster-powered servers...]. either way, i'm not around enough to keep up with fast-moving discussions.

and yes, i've become enamored of the ability to include visuals, sound, etc. that you get with having a blog. funny, though, i'll like the fray less if they soup it up with anything other than faster, healthier hamsters. i like the minimalism there.